The answer to Monday’s blog question can be found at the end of this blog! 🙂

The last two days have been holiday days here in Argentina. When we asked in the restaurant today regarding the reason for the holiday, no-one seemed to have an idea. This parallels my lack of understanding of why most UK national bank holidays occur! The best explanation was the title of this post, it is carnival, without the carnival! 🙂 That made us chuckle!

So the ongoing heat, in the low thirties (around 90 for the Fahrenheit inclined) with a relative humidity of around 35-40% (according to The Weather Channel, and why would they lie), continues to floor me!! However, my tolerance to arriving in a pool of my own fluids is becoming so common place that I am sure that soon enough I will think nothing of it!!

We have actually been pretty busy with work related stuff for the last few days, but managed to get out a little. Let me tell the story with pictures…..

On Monday we were slightly surprised by the absolute closure of most of the town. We went looking for food for Sara! I know we talk a lot about food, but hang in there. When we have guaranteed sources, I hope that this will change. We ended up finding her somewhere that sold ice-cream, so she was one happy puppy!! We also went to find gyms, and surprise, surprise, they were closed! On the way what we did find was: 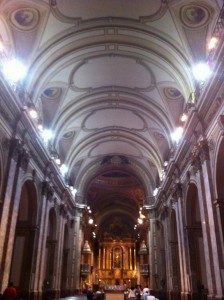 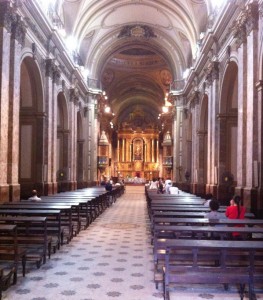 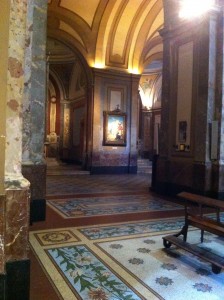 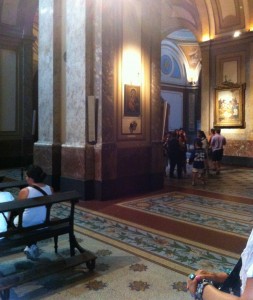 These pictures were quick snaps of the church on Plaza De Mayo, which is called Catedral Metropolitana de Buenos Aires. Have a read of the link to find out more, or send me a message and I will try and find out more and dedicate a page to it. No guarantees on that however! 🙂

We then walked towards the centre, and on route discovered a street designed for giants!! 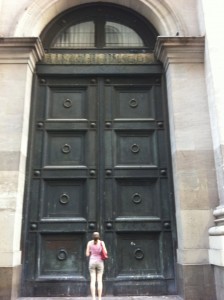 The Door For Giants 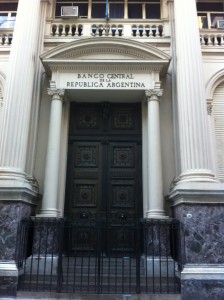 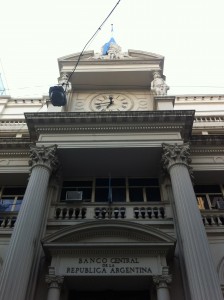 The World Above Giant Door Number 2

It seems that the banks in Argentina are doing well for the most part, if only the staff could push the doors open, they may actually get some work done!!

We stumbled across the Basilica de la Merced, just a stones throw from the banks. I am not sure if any relationship exists between the church and the banks, and for my Christian friends it may be best not to know!! 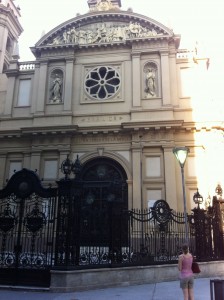 We went looking to see if we could get gym prices, but alas, the public holiday meant that they were closed and while we found their locations, we were not able to get more information. It would have to wait.

I had a pretty awful night of sleep on Monday night, waking up at 1am. I tried to sleep, but alas, my brain would not hear of it!! I tried instead to work through some of my audiobook of choice at the moment; Pillars of the Earth by Ken Follett. I am really enjoying the audiobook and it is epic in its length. Hours and hours of listening pleasure! Although some of it has made me feel a little ill. However, I think that is due to my sensitive nature and feminine temperament! 🙂 After 2 hours of unsuccessful attempts at sleep, but great education advancement due to the book, I rose and started doing some work! I hate just laying there doing nothing, when there is so much stuff to be done!!

At 6am I returned to sleep for 2 hours, ready for the world to begin again.

Sara and I surfaced at 8am, and started work once again. We had a plan out to get food in the restaurant, and due to its proximity, visit the organic food market located nearby. We headed off at about midday, and soon discovered that today was another holiday day!! Many of the stores were closed, and I started to fear that today would be a fast day, as there was no certainty that either the restaurant or the market would be open.

I began to feel some uncertainty that the restaurant would be open, and we took a trip to Calle Florida, which is a long street that connects to the road that we live on which is Peru, to withdraw some cash! Afterwards we saw that a fast food vegan and vegetarian food place was open, it is called Picnic. We had seen it a few times before, but it had either been closed (the most likely situation) or Sara had not been hungry. I prefer not to eat there as I prefer to go to restaurants that at least have a desire to use organic produce. I appreciate that there are all sorts of arguments here, and please feel free to contact me, but that is my decision and let’s leave it at that shall we! 🙂 I really liked the look of the restaurant however. 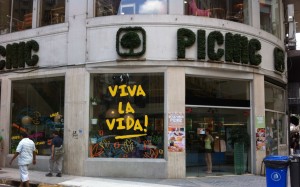 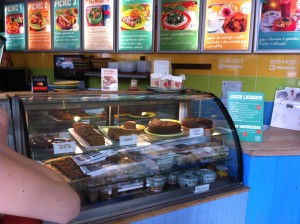 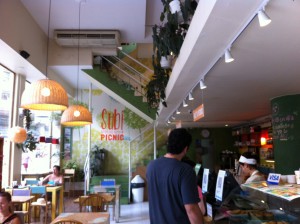 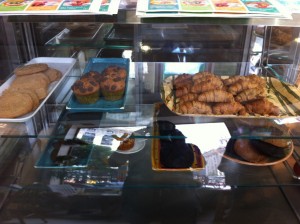 Sara picked up a slice of carrot cake, which actually appeared to be large enough to stick a flag in and declare it British land! However, the Brits have done that a time or two already, so it is probably just to let sleeping dogs and all that!

We arrived a Palermo station and I was pretty warm and feeling the heat of the day. We went in the direction of the restaurant. An all too familiar route. However, this time before going to the restaurant, we thought we would check the address of a market that I had seen on HappyCow! I had previously been given the address of an organic market, by the restaurant, but this was different to the HappyCow listing. The name of the place was La Radiancia, and after a 20 minute walk , after which time, we found out that it was closed: 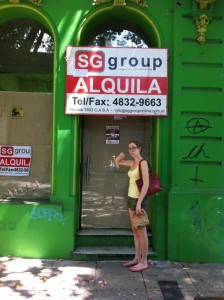 La Radiancia Is No More

We walked back to the restaurant, and ate a range of goodies. I went for a raw bruschetta recipe: 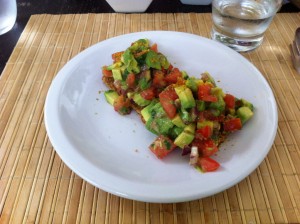 While Sara opted for a vegan pizza, which comes with a vegan cheese: 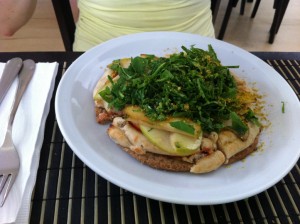 I picked up a wrap for later and had 2 raw almond milk shakes that really hit the hunger spot.

I asked in the restaurant about the organic food market and was given an address of just a few blocks away, so I let Sara to finish her food and quickly went to investigate. The store had people inside sitting at a large table, but the area was taped off to the general public!! 🙁 However, I now have an idea of where it is, and it is somewhere we can investigate any time that we go to the Kensho restaurant. Although it is anybody’s guess as to its opening hours!! I could have just misunderstood how the system works and perhaps I am to just ignore the tape, time may tell! 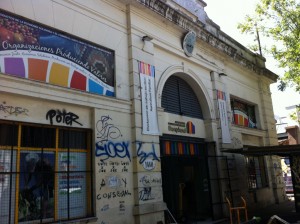 We then headed back, but took a detour to an eco laundrette called The Laundry Company that I want to speak to, as eco laundry detergent here is virtually impossible to locate. However, as you may have guessed, it was closed: 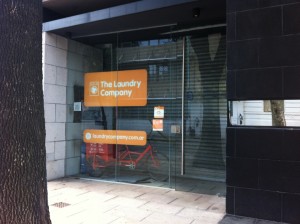 The way home was the usual Subte excitement and this time I thought I’d expand your knowledge with some photos. Here goes: 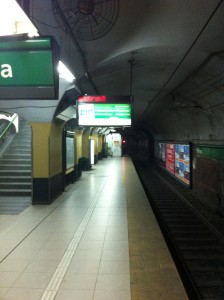 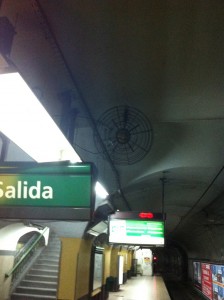 While we had the usual assortment of all sort of characters on the Subte train, we were visited by the blind man that I mentioned in a previous post: 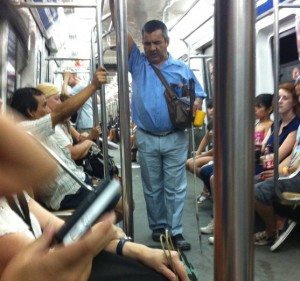 Blind Man On The Subte

As a final note, in regards to the comment in the previous post about guess the building: 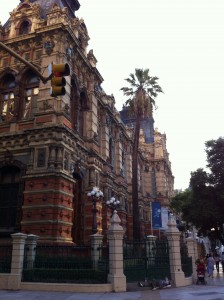 You May Be Surprised

The answer to the nature of this building is a water pumping station, known as Palacio de Aguas Corrientes. Well done those of you that got it right, and commiserations for those that got it wrong.

Sleep tight all and hope to hear from you soon.

4 thoughts on “Carnival, Without The ‘Carnival’!”