It seems that life is becoming a little more certain! Well as certain as things will ever be in a place like Argentina!

When we first came here, I had a few ideas and hopes. I thought that things would be cheaper, as I like the idea of saving money, and I thought that we would have some sunshine, a chance to escape some of the cold grey days of the great British winter. I think that I have been surprised somewhat by the costs. Due to the desire, according to what I seem to be hearing, that Argentina strives to be virtually self-sufficient, and relying little on North America and Europe, especially in the direction of agriculture, this seems to bring about a huge variation in costs, and availability. With regards to the sunshine, well, it is pretty consistent, and my curiosity at looking at the future, courtesy of the Weather Channel website, seems all but fruitless! They have predicted a number of storms and downpours, that all seem to just change and disappear, only to be replaced with sunshine. Originally the weekend was supposed to be rain for both days, and while we did get some cloud yesterday, for the most part, the weather is hot and sunny!

We managed to locate a market for organic, local, and ‘artisan’ food. The thing that I am beginning to understand here is that there seems to be a little bit of grey when it comes to the whole organic movement. This was somewhat true, from my observations, in a number of places including Italy. However, here in Argentina the organic certification process seems to have very little strength currently. So a lot of farmer’s markets and the like state that they are organic, but they do not have the money to pay for certification. I can appreciate that these are financially troubled times, as if there has been a time that isn’t! There has always been the poor and the not so poor! Anyhow, while I can understand that certification is not a completely ideal process. The certifying organisation for one may be corrupt and assign organic status to farms and companies that simply bribe individuals or groups of individuals to allow them to sell their produce at a higher cost. It can be a case that when the certifying company comes to examine the facilities where the organic foods are grown or processed, that they put on a good show, that is not accurate to the day to day process, and so on and so forth. However, it is a step towards creating a process and while in places it may not be all it promises, in some places it is, and eventually the hope is that the processes will become more established and the system will evolve and improve. So when people reject a system and dismiss that organic certification means something, I am not so sure that I agree. While I can appreciate that small companies simply cannot afford to pay for certification and that by instituting a system that favours the wealthier companies, organic food tends to exact a premium price on market shelves, and for me that needs to be backed up by something. I confess that I am more than a little naive of the costs and complexities of the organic certification process, but that is my current point of view. So I find that we are in a position of buying from farm representatives directly on market stalls, who state that their food is organic, but I am not entirely convinced. The joys of being a cynic. 🙂 However, while I am not entirely convinced on the authenticity of the organic status, I still feel more comfortable buying from small farm producers rather than massive mono farming companies, that sell their products in vast quantities in supermarkets and warehouses! I feel that these companies offer little in terms of desire to provide anything other than the highest yield whatever the eventual social and environmental cost. There you have it for some of my ethics! Bored? Okay let’s move on!

After purchasing a range of goods at the market, once again with the expanding goodness of the string bag, which was required to fit a small hippopotamus sized quantity of food into it, we headed for the Subte. However, as the new market was near Kensho, the restaurant we often visit, we knew the area a little. We had seen another organic restaurant (which I had photographed in a previous post) and the place is called Bio or Bio Solo. I had read that it is possible to buy produce there, so we went in. We were welcomed by a young man (although increasingly everyone seems young) and I started with the usual no hablo nonsense. He said that he spoke English and the fun began! We got chatting and I started asking him about where I can get food, possibly in bulk! He said he could probably get me some bulk items if I tell him what I need, but perhaps more importantly, he gave me the address of a store around the corner that sells this sort of thing! Woohoo!! We purchased a few things from him and left, with the idea to pop back in there at some point as it seemed friendly and fun.

We then went to the adress that he had given us, for once it was just around the corner. Usually i end up walking for days and getting heatstroke, all to get a bowl of shrivelled olives or the like! The store was closed, yeah I know, but the opening hours are actually something that we can work with! Also, because the location is close to a range of other places that we will visit again, we will not have to make a special journey to head there. Perfect! 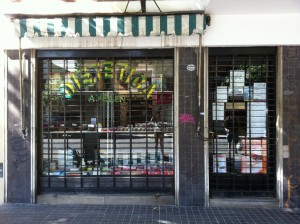 That night I prepared dinner, and we ate together, and we lived to tell the tale! 🙂

I have taken to trying to complete at least a couple of hours of Rosetta Stone Spanish each morning, and sometimes this is easier than others, but I am pretty consistent so far, which is good. My improvement is still impossible to see, but I things are progressing pretty quickly in the world of online Spanish. They have introduced all sorts of squiggles over the letters, and I am now having some real issues with the sound difference of bebe (to drink) and bebé (a baby), and traje (suit) is messing me up with pronunciation! I am holding firm though!!

Sunday was another work morning and afternoon! We eventually managed to get out of the house at around 17:30 (5:30pm) as I really wanted to try and see if we could buy a few items for the apartment. I would like to get some things like an electric handheld vacuum cleaner, a mop, some dustbin bags and the like. We set off and I was on a mission.

I had also decided that I would try taking some videos for the blog, even though I dislike almost all aspects of myself and therefore recording of my voice, or images of my physical form disturb me! The things I do for you people, and for what I ask myself? 🙂 Anyhow, I randomly used the camera and I am playing with the results. I have included the incredibly shaky walk up our street from our apartment here:

YouTube has done a marvellous job with their steady adjustment of the video! If you see the first part in which I have put text, that looks like I am fighting an army of weasels that have gained entry to my knickers. Well that is what the whole thing looked like! However, they seemed to have done magic with it! Thank you YouTube clever boffins!!

I will work on my technique with this and see what I can perfect in the next few weeks, please be patient. At my age everything needs a little more time than it used to!! 🙂

We managed to find some interesting things on route, there was what I thought to be the start of street festival, but it turns out that it was the end! Typical! 🙂

As we walked on there was a dye powder that was such a peculiar bright red that my eyes almost bled to look at it. I took a photo, but it really does not do it justice. 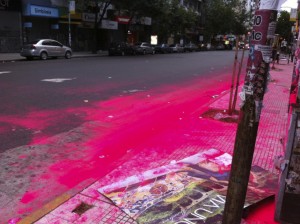 I cannot express how strange the architecture here is, although, perhaps it is similar to London and I just do not see it. 2 buildings that are next to each other can be so radically different from one another, one a truly grand construction and the other that looks like it will not last the weekend. I took this photograph as we walked as the roof is really magnificent to me. 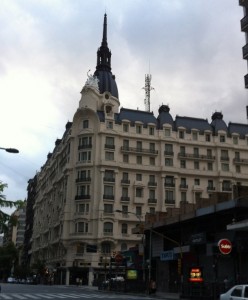 All in all we managed to get a new wash cloth and a pack of 30 small black bin liners! What about that for success! 🙂

We went home and had day two of home prepared meals! We are almost making it work, if only I could find a vacuum cleaner… 🙂

6 thoughts on “Differences Of Opinion”