Prior to our departure for all things Argentina, I like to do a range of reach outs, and what with the glory of the Internet, this is actually quite possible. One of the companies that I found, and that I contacted was Cocina Verde, and they are a health food home delivery service. We have had a few emails bounce back between us and the owner of the business, a displaced American, named Kara Bauer. When we arrived she was not in the country, but she got back last weekend. Anyhow, it turns out that she lives just around the corner and that she wants some information and advice on things website based. So it seems that we may be able to assist people here as well! Yippee for being useful.

So we met up with her in the evening at around 7 as she has had a person looking after her apartment while she was away, and her friend had a management position working on very high profile websites, in her home country of Australia. So we arrived and discussed some, and listened mostly to their ideas of a possible future direction of the business. Well Sara did, I mainly stroked the Yorkshire terrier, that shares Kara’s living space. I confess that the dog’s breath was a bit whiffy, but in all fairness it eats some pretty dodgy stuff, at least in my view. Also, I did not need to kiss it, and it did not seem to mind the having bad breath!! Who was I to judge?

The greatest advantage in truth for us was in learning a little more of the world of Buenos Aires. Kara has been here for 7 years now, and seems to still like it, despite having been robbed at gunpoint, according to her stories. She is very sympathetic to the people here however, and explained that the people that robbed her were not violent, they simply wanted things that they could sell, or money and then left. She also spoke about the fact that it is worth being very careful and not displaying high cost equipment and electronics in easy reach in populated areas. She said that she almost had her telephone grabbed from her while sitting on the Subte. The immediate effect of this that Sara has gone into paranoid mode initially. I hope that this will be a phase, as now, when I pull out my phone to try and get directions, she becomes a meercat looking for all signs of danger!!

One of the most significant things was a ‘green map’ that Kara had of BA! This displays all sorts of eco and green companies and things around the city! While this is a paper map, Sara found that it had a URL that points to a digital version of the map!!

The result of this was our usual trip to Kensho for lunch with a dinner take away, and then a trip to a farmers market that I found on the Organic Buenos Aires website. The market was called El Galpón, and is located close to a train station and Subte station. We purchased a range of fresh produce for Sara and I, and some bread goodies for Sara. 🙂 The huge bag of produce that we walked away with (a string bag that we took with us) cost a little less than the price of our daily lunch and dinner bill! It took us a while to work out how the system worked, so let me tell you, in case I forget! Each of the stalls had a range of products, and so you go to the stall holder and select the items that you want. The stall holder totals the values of those items and gives a piece of paper with the total on it. You then move to another stall until one has selected all the items that one wants. WE then went to the central area in which one hands over the list of paper receipts and pays the total price. Each of the receipts are then stamped to validate them, and then these are handed to the stallholder for the goods agreed. It was really fun talking in our very broken Spanish and their broken English and working things out! We left on a buzz of having had a fun time, and having found some food for me! 🙂 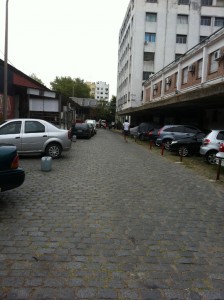 The Street From The Farmer’s Market Entrance 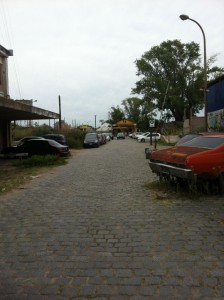 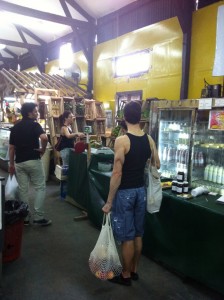 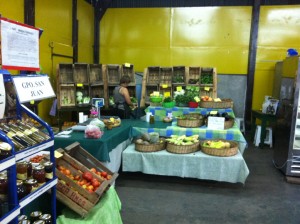 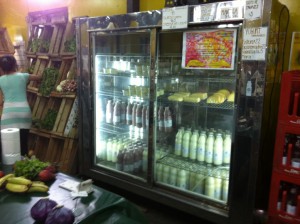 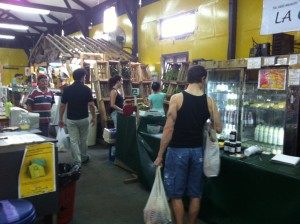 Another One of Me, In Case You Missed The First 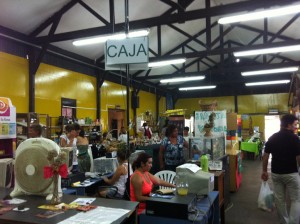 The journey home was pretty fine, with the usual requests for money on the Subte from children, and people trying to sell all sorts of things. We were surprised when a guy selling scissors was taken up on his offer by the lady sitting next to us! It just seemed like a random thing to offer, and strange that someone should be thinking, by golly I need some scissors! Maybe there is such a thing as fate and that lady and that scissor selling man were just destined to collide at that point? Who knows? Not I, that is for sure. Sara was a little sad, as just before we got to the apartment, she had been lovingly holding a large glass bottle of organic apple juice! Literally a block away from safety, she slipped on the sidewalk and let go of the bottle which tumbled from her hands and smashed completely. We scrapped the majority of glass with our foot out of the road and beside the curb! A shame but accidents happen! We have sworn to buy another bottle next time! We will be victorious in this! 🙂

So all in all today has been pretty eventful in regards to finding food and seeing new places, it could have even been an opportunity to get ourselves some scissors! Perhaps an opportunity that we will regret having not taken advantage of! I am not sure that I’ll lose much sleep over that! 🙂

One of the things that we saw, that can be used for washing here, and I have seen them in the UK and US are the washing ball things that use no chemicals. Please see the Wiki article. I am curious to know if anyone has tried them and if they work, as they are pretty expensive, and I do not like to waste money, time and objects that have taken resources to create. Any recommendations or advice is greatly welcomed! Thanks.

5 thoughts on “Meeting The Natives & Finding A Farmer’s Market”