Prior to our arrival here in Argentina, I contact a few individuals and companies that I thought may be able to help me to find places to eat. One of the companies is Cocina Verde, who are food delivery service here in the city. I was contact back by Kara, who seems very informative, but she is currently out of the country, and due to arrive this weekend. She lives a few blocks away apparently and I am sure that we will meet up when she get here. However, one of the things that she mentioned in our light correspondence thus far is that there is an organic food market 2 blocks away, every Friday.

Excited at the idea of eating some proper food again, I woke up at 7am and prepared myself to go and explore, and see what I could find, as while I was not able to find online information about this particular market, it does seem that markets in other areas start at about 8am! I washed dressed and headed out a little after 8 for what I hoped would be a success on the food front! 🙂 It soon became obvious that there was no market at the point that was given – Péru y Chile crossroads. I went for a while in a range of directions, and nothing except a lot of traffic. Demoralised I returned and sent Kara a confirmation email to find out if I had understood! Apparently so! This remains a mystery and I will investigate further when I actually see her.

Today I knew that I really have to find food! That was my one driving ambition. So with disappointment riding high on the tail of the market absence, I set off at around midday. Sara had work to do so left me to it! I decided to walk to the places I went to yesterday with a series of objectives. 1. I wanted to find SUBE cards which I am informed are like London’s Oyster cards, so you put money on them and the travel is slightly discounted per journey. 2. Find out about local SIM cards. 3. Discover the ins and outs of how to withdraw money. 4. Buy what I can from my shopping list.

On route, I found a place that sold SUBE cards and bought one for Sara and I. Sara later told me that these are issued for free in particular places, so unknowingly I spent 30 pesos for 2 cards, which should have been gratis!! 🙁 Anyhow, I got those and paid with some of the few notes that Sara had given me, which was all of the cash that we had (money that we exchanged at the airport).

I then found a large Movilstar store, which was on the way in my search for food! I joined a queue, and this is one of those nervous things for me at the moment. As I am never quite sure what I am joining. I think that immediately my Britishness simply looks for a queue and I stand in it and hope that it leads to something that works out to be useful! I finally got to the front, and a woman standing a little in front of me said something, something that I had no idea of what it was. I just stood there waiting. Then a main behind me said something, and I took it that I was to go and speak to this woman, as she was the next available assistant. I approached using my standard phrase, yo hablo un poco español, which I hope means that I speak a little Spanish. Then I go through my usual round of communication, of saying key words and pointing to relevant things. In this instance it involved me pointing to my phone and saying sim card, and prepaid. This resulted in a flurry of language ending in the word passport. I confirmed with the question solo passport, which I was hoping conveyed the idea of asking if I need only my passport. She agreed, and I hope that this was a done deal, and I will try again, next time with a passport and I will see what happens next.

So those 2 things done, it was time to knuckle down into the world of banks. I tried HSBC, CitiBank and Santander cashpoints, joining queues like the good Brit!! 🙂 However, none of the 3 cards that I tried actually worked. 🙁 It was about this time that I was beginning to consider my options, as the absence of money could be a limiting factor! However, as a last resort I thought we could do some Western Union transfers and get cash that way.

I carried on in my pursuit of food. The day was freaking hot by my standards, which is anything above freezing, and I am wearing more than a thong! I became increasingly aware, to my shame, that I was pretty sweaty in the underpits area. A common occurrence for me, but one that never fails to make me feel a little uncomfortable, as I see everyone else, and they seem so sweat free! Even big folks!! Oh well. I tucked into a few shops to try and take advantage of their AC.

I finally made it back to the 100% Natural store and they were very friendly inside and I had a look at their products which appeared to be alternative, but not organic and their dried fruit seemed to be under the influence of sulphur dioxide poisoning! So I am not sure that they will really serve to be of use to me! I left there to continue my journey in pursuit of the elusive Kensho, the vegan, organic place that we tried yesterday.

I eventually found and it appeared to be locked again!!! My heart sunk in despair. This was it my last hope to eat something. I was starting to feel a little weak and tired, and I just felt really disappointed. I saw someone sitting on the steps outside of the locked door and asked hablas ingles? Do you speak English? I got an affirmative and so I asked about why the place was closed and when it was expected to open. They told me that the store was closed and will probably open again tomorrow. They asked me what I was looking for and I explained that I wanted to get some food. They then said that the restaurant was open and that was located next door. It was then that I realised that it had probably been open the night before, and I had simply mistaken the store for the restaurant!! Oh well!! However, my heart sung with the prospect of food. 🙂 I went inside, and was the only customer! I started with a bottle of water to replace the lost fluids of my armpits, ready for the next round, and then I chose a bitter chocolate almond milk with cardamom and i think vanilla, it was really yummy: 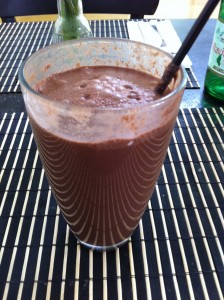 I purchased 2 vegan, organic wraps to take away. So Sara and I would have something for later. I then began my journey back. I managed to find somewhere on the street as I was walking which had an open Wifi connection. This allowed me to WhatsApp a message to Sara to let her know that I was alive and on my way back! She appeared to appreciate the gesture. I then went to the nearest subway; Palermo, and added 10 pesos to each of the SUBE cards, which I could only pay cash for. Our depleting cash reserves hitting a point of tragedy! I then used the card to pay, and it seemed to cost the same amount as if I had paid for the ticket directly, so I am not impressed with the card so far!!

That got me back in double quick time. I did another circuit looking to see if the market that Kara mentioned was there, I couldn’t see it! 🙁 Then I returned home via a street market to purchase toilet tissue as it was getting close to using body hair, body parts and the like to replace the convenience of paper! This pretty much saw the end of our real money. 🙁

I returned and Sara and I went to the bank together, romance isn’t dead with us eh? It turns out that one of her bank cards worked fine, so we withdrew enough to cover us for a while! My cards however were still dead!! 🙁 We returned and I contacted the bank using our Skype account. After a few attempts and a range of challenges I managed to find out that my card was flagged as at risk and had a block on it! This has now been lifted and all should be good! This will be tested soon. We still need to contact another of our banks to determine why that card is not working, but it is immensely reassuring to have access to money again! 🙂

I think that we will return to the restaurant this evening so that I can show Sara, and I can have dinner! Things are certainly looking up on the food side of things. 🙂 Viva Argentina!!

I have included some photos of sites that I saw today. Please note that I have no idea about what most of the things that I am looking at are. However, I just point and click and pass it on, so feel free to tell me if you like particular things and I can focus on those on my next excursion! 🙂

The are lots of cars here that have been bashed around a bit. I have not witnessed any accidents yet, but seeing the state of a lot of the cars, I am sure it’ll not be long:

Many of the buildings look like they have seen a great deal of expense and affluence, but have fallen into a state of neglect. I have seen this quite a lot in places like Italy and Hungary: 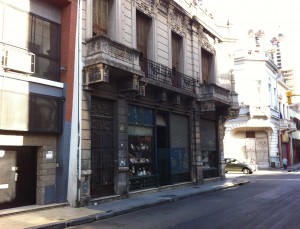 Of all the establishments, the most consistently well cared for appear to be the car parks that are often enclosed, although there are some open air ones: 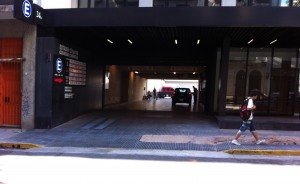 Walking around on my early morning market hunt, the cars were already at standstill, and in such a confined street, the smell of fumes is pretty intense. Not recommended to improve lung capacity: 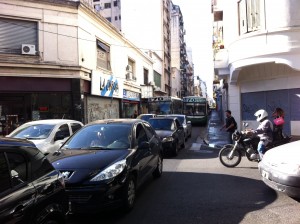 Stepping out of the subway station at Catedral, which is pretty close to our apartment in San Telmo, there are a few finely ornate properties and monuments: 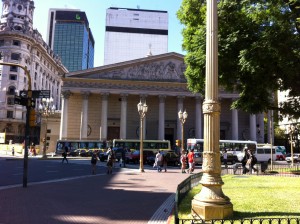 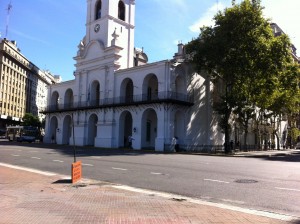 2 thoughts on “Yo Tengo Hambre”