The one thing about living in a city is that there seem to be things going on pretty much whenever you step out of the door! However, it could be that I am living in a Truman Show type existence and in fact these things are only there for me and things are happening nowhere other than where I actually visit. Please let me know if you actually exist and if you are not just extras in my life!

On the Friday eve, after a grueling day of slaving over our hot keyboards, we decided that enough was enough and went into the dark (when the sun went down) unknown of BA. We decided to explore an Ecological Reserve which is virtually on our doorstep, in an area called Puerto Madero. Now Puerto Madero has seen, and is still seeing, a whole host of urban regeneration. There are some very nice looking areas, although please understand that my idea of nice looking may be somewhat skewed after a month here in Argentina. However, it looked pretty well to do in many parts, and the pavement remained pretty much intact for an entire street!! Impressive! 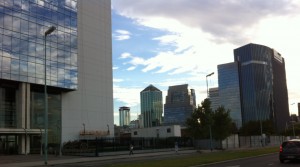 A Snap of Puerto Madero

The sky was pretty dusky by the time we hit the outskirts of the reserve. I took some photos, but the light was not good enough to produce images of the sort of quality that you are used to when reading these blogs, and that is saying something!

On the way back home we stopped in at Frevega, which is a big electrical chain here. Sara and I decided that we would make the commitment of buying ourselves a hand vacuum cleaner for the apartment. Having little in the way of household appliances, maybe due to it not being a house, I have already become tired with the amount of hair that forever decreases from the to of my head, and forever increases on the floor! It cost us about £20, and it is my new best friend (well of an electrical sort).

On the final stretch we stumbled across some sort of demonstration that was occurring in the street. I took some video to share with you here:

On the Saturday afternoon we broke out from our work heavy life, with the idea to see if we could go to Jardin botanique – a local botanical garden (and pay a visit to one of the markets that sells local, organic foodstuffs). This was one of the things that had popped up on things to see around Buenos Aires, so how could we resist?? Impossible, I am sure you understand! On the way to the Subte we did our usual walk past Plaza de Mayo, and lo and behold there was some sort of something going on.

So I provided a bit of video goodness, although in all actuality it is pretty boring! Good news is that I have managed to work out some editing techniques with the iMovie software, and I have shortened the video, albeit pretty badly, to a far more reasonable length. I hope it is a little less boring for you!!

We arrived a little late for the garden and vowed to return the following day for a taste of triumph in the face of adversity. Okay, maybe a bit of overkill there, but we had a plan B anyhow! Instead we headed for the market and picked up a fine array of raw crackers for me, some crackers and bread for Sara and some sultanas for me! 🙂 Happy times. We thought we would head back and see what was happening at the stage we say earlier at Plaza de Mayo. This was it:

The Sunday was it, the day to go garden hunting! I had anticipated a few hours of intense walking and engaging in a range of exciting botanical treats. The garden was pretty nice, the weather was lovely and we took the opportunity to make the 90 minute walk there. 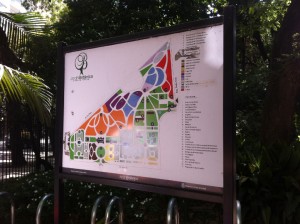 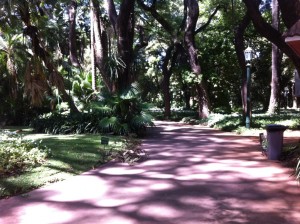 All Paths Lead To Jardín Botánico 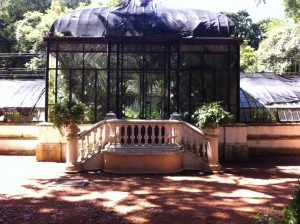 A Possible Health And Safety Nightmare 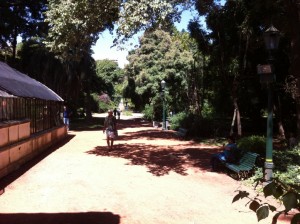 What Is That Yonder? 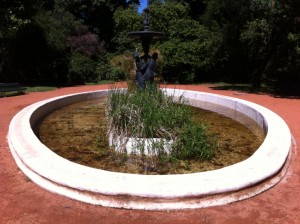 In the main house they had a very small history of the area and some explanation of the wealth of the area originally coming from the cultivation of yerba maté, but that is a story for another time. 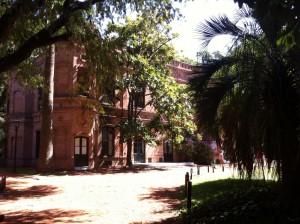 The Main House In The Garden 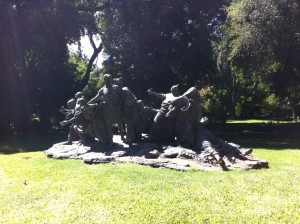 Statue Of People Up To All Sorts 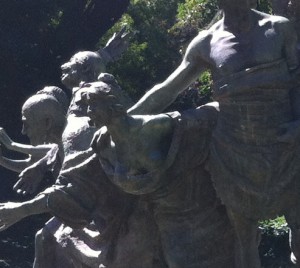 The Girl That Is Always Part Of The Party

A place To Rest And Consider How Tranquil Life Is 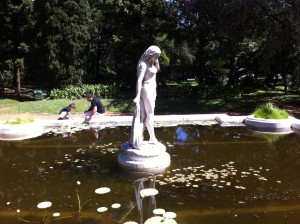 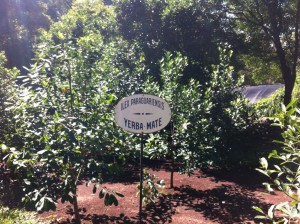 In all reality the garden was a bit of a let down! We had tried to go a couple of weeks ago, but due to a storm a couple of days before they had closed the garden due to debris, and possible release of prehistoric from their underground crypts! Anyhow, all seemed back to normal for our visit.

On one of our return journeys over the weekend, I forget which night it was, we stumbled across an often seen phenomena, which is the people that dig through the numerous bags of trash that are left by the side of the road. The city must take this stuff away, as it disappears, but not before this rubbish ninja squad do their thing.

And while you may think that it is pretty rough having to dig through garbage, I stumbled across this little statistic gem of the class divide in the wonder of the US economy. Some food for thought. Will our children be the ones digging through the trash? That may be metaphorical children for many of us, but you get the idea!!