So last night we ended up going back to the Kensho restaurant, I was excited to go with Sara, and try and impress her with my recent knowledge of the town and people. We took the Subte (subway) there, and found it without problem. It was pretty late by the time we arrived, but there were a number of people already there including a group of about 6-8 females around a table.

We consulted the menu quite thoroughly, and I decided to go for a raw starter and a raw main, and Sara opted for a vegan main. We both had smoothies to accompany our meals and a carafe of water. 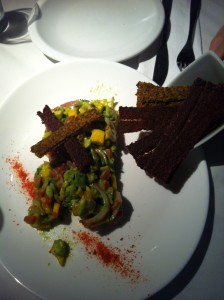 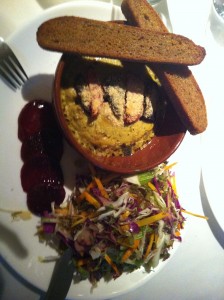 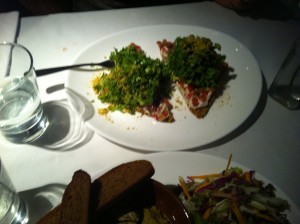 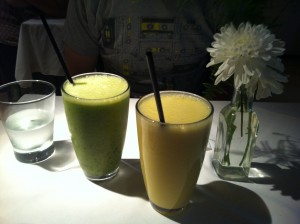 We finished at sometime after 23:30, and that is 11:30pm in real money, and headed back to the Subte station. On arrival, we discovered that the station was closed! This resulted in us having to walk home. A journey of about 1 hour 45 minutes. Sara was less than ecstatic at this news, but she soldiered on and we got back around 01:30. We pretty much collapsed into our bed!! Another day done.

I woke to the absence of sound except the spinning blades of our ceiling fan! It was around 07:00!! I couldn’t sleep further and my brain buzzed, so I started going through stuff on the computer while Sara slept. She woke up at around 10:00, and joined me in the world of consciousness, I think that she may have been disappointed, although she did mention that she had a dream in which she shook someone to death. I made a mental note, to keep clear of hugs for a day or two in case it was a hint!

Today, we agreed to purchase an online course in Spanish with Rosetta Stone! It provides 12 months of access to their system and then you have to pay a chunk if you wish to subscribe for another year. Our plan is to get as much out of it as possible, as we really need to start speaking with people pronto!! Sara went to work immediately and started using the iPhone app that you can use when you sign up. She was repeating the words like a native in no time, so as long as we can get involved in lots of activities involving children eating and drinking, we are pretty much there. Playgrounds may be our next stop.

At around midday, our doorbell rang and with excitement I ran down the 4 flights of stairs to collect what promised to be our first and potentially last (according to our satisfaction of the enclosed products) of our home organic food delivery. I collected the box, and with excitement went back up the 4 flights to bring our new collection of goodies to my wife, the woman you know as Sara. The food delivery company is TalloVerde, and the products arrived in a large box, we forgot to take photos, due to our anticipation and enthusiasm. However, all the products were accounted for and in quantities more than were listed, so obviously we felt even more pleased. In honesty we were pretty delighted with the food order quality, and have decided to continue to use this service despite the inconvenience of a Saturday delivery. It is also a great education on building familiarity with the names of some of the foods that will probably be seen on the menus that we peruse.

Sara was busy working on a new tutorial for the business and I took the opportunity to look at some of the new Spanish course. So I worked through the first few units of repeating a range of words about children running, people having pens, and reading newspapers. It was actually pretty okay, and I am sure that it is all building for an end of level finale in which I will need to conquer the baddy that is the Spanish language with my new found arsenal of vocabulary and language structure.

We are off to Kensho again this evening as we are still low on food, and it is fun to practice a little bit of language with people that actually use it. I may try and convince Sara to stop in at a gym on the way to have a look, as this is still something that is very much on my list of requirements.

Anyhow, we are surviving, and I am getting food that is vegan in the crazy meat eating world of Argentina. I pat myself on the back and wonder what happened to make me such a stubborn idiot!! 🙂