So sometimes we are put in situations that test our character;a chance to see what drives us and those things that are important. In a sense that has been a big part of what the trip to South America has proved, whilst my standards have dropped a little I have managed to stick pretty close to my desire to continue my learning (Spanish, and numerous technical things that I need to learn for work), my focus on exercise and physical activity, whilst less is still happening with my recent membership to Sportclub, which will give me access to any of their gyms in Buenos Aires (which they say there are 20 of them), and my relentless desire to eat food as cruelty-free as I can find. I think that I have had a few situations in which the food has not been organic as I have yet to find an entirely organic restaurant, but I do feel that for the most part I have managed to adhere to my value system. Fortunately, bending the law is not one of the things that does fit nicely in my value system…..

So it is not technically breaking the law to travel out of the country and promptly return just to extend a visa, but it feels like it is a little naughty as the law is unlikely to have been created to generate such a process. However, it is a well-known and typical way of the average American or British person to just extend their stay for another 3 months. The situation goes like this:

1. British tourists think to travel to Argentina (let us use Sara and I in this example as it seems relevant to do so).
2. Said tourists (Sara and jj) realise that travel to Argentina is limited to a 3 month visa limit, and when booking tickets to arrive in Argentina, a continuation of one’s journey (return to country of origin accepted) must be purchased that is not beyond this duration.
3. Tourists (Sara and jj) arrive and delight at the sunshine, that unfamiliar feeling of sun warming skin and the new smell of people!
4. Three month timespan quickly approaches and ways of extending are looked for, which leads to the discovery of Buquebus.
5. Tickets booked with Buquebus for the closest place in Uruguay, which turns out to be Colonia del Sacramento.
6. Trip taken across the brownish water to the splendors (?) of foreign lands.
7. New visa issued on leaving Uruguay which states that passport owning tourist has just arrived in Argentina (again), and a further 3 months are granted. Yippee!!

So you see, the situation suggests that this is not what was intended from the outset, but this seems to be the classic case of humans doing what humans do pretty well, finding ways around the systems that other humans put in place.

Despite the rather pleasant weather that has been in place up until today, things have changed, and not for the better. Having set out with ideas of not spending too much time in places wet, we are primarily set for summer, and should that change, we are both pretty unprepared. Our early morning walk to the Buquebus terminal, which is located close to the Ecological Reserve in Puerto Madero resulted in us both getting pretty wet, and contemplating the idea that taxis exist for a reason! We were advised when we bought the tickets online that it is advised to arrive 2 hours before departure. Seems that no one told Buquebus this rather pertinent bit of information. We arrived at 6:40, and discovered that the checkin for our trip would not open until 7:30. Still we occupied our time with people watching and taking trips to the bathrooms to see if we could dry off a little!

Ferry embarkation was pretty quick, but we made a classic rookie mistake! Despite getting on-board very swiftly, we did not take advantage of the couches that were positioned close to the entry point, and instead took a little time to look around at what was offered. This only cemented in our minds the fact that the other seats offered little in the way of space, and comfort was a little questionable! When we returned to the other, more comfortable couch seating, they had disappeared under a sea of smarter backsides than ours! We skulked off to the cheap seats and watched the repeats of MTV hits of the 70s, 80s and early 90s!

We had paid a little more for the rapid ferry, which is over in an hour. I originally selected this option as I wanted longer to explore our new landscape. A plan that backfired somewhat due to the change in weather. We disembarked pretty much at the end of the queue with the stark realisation that the 10 to 11 hour stay in Colonia is going to be LOOONG!! I had looked online and found a few possible places that may offer food, but pickings were small, in fact non-existent. It was a case of picking the best of a list of places that offered vegetarian options. However, I had taken the usual precaution of preparing my food for the day the previous night. Well Sara actually did it for m, which was very kind. I think that she is mainly motivated in this period to watch a series on Netflix which she watches during food prep time. Whatever works for her is great as it got me a dinner and some food for the trip, all while I was doing some online studies!! 🙂

We ended up walking all around the place to find one of the locations I had found online, a place called Irene’s, and it thankfully has WiFi (password: irenes33 at the time of publishing, if anyone is interested! 🙂 ). It looked a little like a greasy roadside café that would not be totally unfamiliar in the UK, or similar to a Denny’s but so much smaller in scale. The menu was a little ropey, but Sara took one for the team and went for the breakfast, while I asked (in very, very, very bad piecemeal Spanish) if I could eat my own food. I think I managed to get my point across and they agreed, probably due to their understanding that to try and explain why not would result in one of the parties contracting a bad case of language tumors!! A path neither wanted by all accounts.

At Irene’s, and we are not alone: 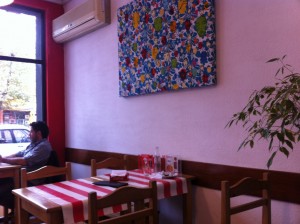 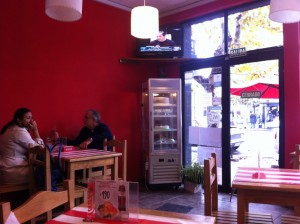 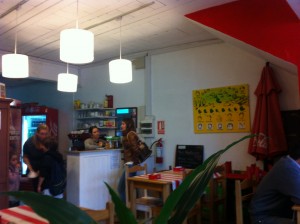 So this is where we are, it being 13:00 in the afternoon, with a good 7 hours before the departure of the ferry back to familiar soil. We are wondering how long we can hide in this café before they realise that we are here not to buy lots of food, but simply to use their WiFi and their toilets, of which I noticed that the gents did not have a toilet seat, only the porcelain base. This could be a problem given my rapid digestion, but I will save that for another time perhaps!! 😉

Please accept the lack of photographs, but we really did nothing but walk from the ferry port in Colonia to Irene’s in the rain! Hardly the stuff of postcards! 🙂

2 thoughts on “It’s All About Interpretation”